Our partner Eden Reforestation Projects has seen a year of unprecedented growth and in this week’s news, we look at their last year.

Eden’s mission is to offer the dignity of fair employment to people living in impoverished communities, who then become transformational agents of global forest restoration.

Their global restoration network is creating livelihoods for millions of people living in extreme poverty by empowering them to restore and protect forests on a massive scale.

We are also immensely proud that our partnership with Eden supports 9 of the United Nations Environment’s Sustainable Development Goals (SDGs).

They also managed to provide full and partial season employment and a fair wage to 17,586 individuals living within impoverished global communities.

Play It Green chose to partner with Eden Reforestation in their most established Project Nation – that of Madagascar.

This project began in 2007 and has grown from 1 to 76 project sites within the country that had suffered over 90% deforestation.

Over the past 14 years, more than 407 million trees have been planted across the country, and over 4 million workdays have been provided to people living in extreme poverty.

The next largest Project Nation is Indonesia. 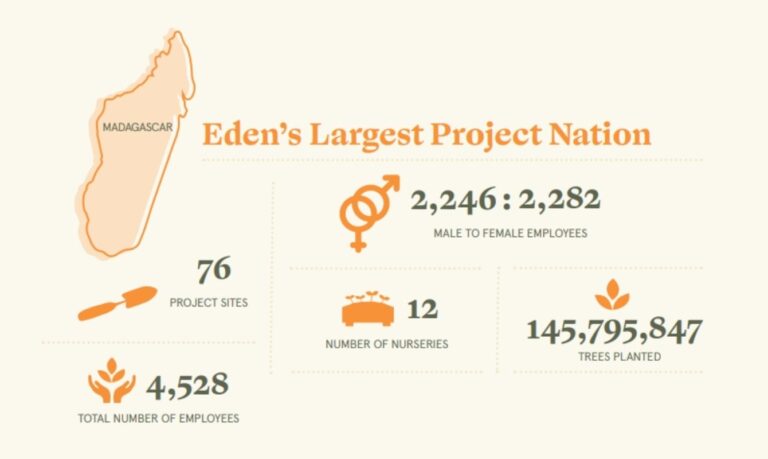 The next largest Project Nation is Indonesia.

Made up of over 17,000 islands, Indonesia is one of the most biodiverse regions in the world.

In the last three decades, Indonesia has lost over 40% of its mangrove forests, affecting not only the environment and the species that rely on forests but also the communities that depend on this ecosystem for survival.

Eden began working with the local community on Biak Island in 2017, focusing on the restoration of mangrove and tropical forests. Eden also promotes food security by helping local communities plant a variety of agroforestry trees.

Since its launch, the Indonesia Project has planted over 24 million trees, providing 248,545 workdays for people living in extreme poverty.

Play It Green’s next Project Nation partnership with Eden will be in Kenya.

Kenyan forests have been cleared for charcoal and timber, resulting in highly degraded land.

This has caused unpredictable rain and weather patterns, resulting in landslides that have taken lives and damaged infrastructure.

Within one year, the international team in Kenya has planted over 4 million trees, making Eden Kenya the largest, most efficient reforestation organization in the country. 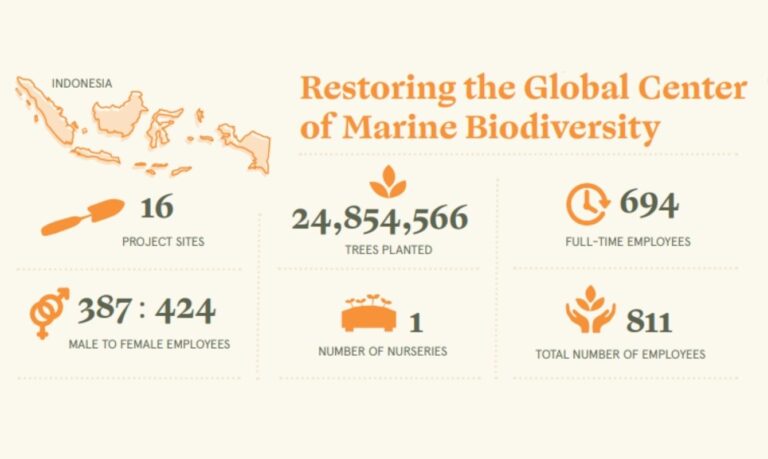 The goal for the next twelve months for Eden is to plant a minimum of 240 million trees although there is a current capacity to plant up to  360 million trees in just one year so if any readers would like to help and haven’t already, please sign up!

Operations in Madagascar, Mozambique, Kenya, Nepal, Indonesia, Haiti, and Central America are all being expanded in the coming year to restore additional areas that are highly impacted by deforestation.

The aim is also to open a minimum of five new project nations.

A relaunch of Ethiopia and the launch of Brazil, the Philippines Island, Guatemala, and Belize are at the top of the active expansion goals.

At the point of writing this article, Eden Reforestation Project has planted 633,116,258 trees across the globe and created 6,331,162 workdays.

‘Our partnership with Eden Reforestation Project is critical to our goals to save the planet and help everyone take a journey to a more sustainable future. When you plant with Eden, you know that the trees are being planted and they are being monitored and protected. Not only that but all the people employed are paid a fair wage and provided with the opportunity to leave poverty behind.’

As a business, you can learn how to lower your footprint, help reforest the planet and take a journey to a sustainable future by subscribing to Play It Green from £5 per employee per month.

Sign Up To Change The World
Back to articles