As we near the end of our first month in business, here is the first update on the trees being planted by our planting partner, Eden Reforestation Project.

The trees our wonderful members have offset their footprints with are helping reforest the island of Madagascar.

Madagascar is more than just a magical island from a children’s film. It’s a country with over 200,000 species of plants and animals found nowhere else on the planet. 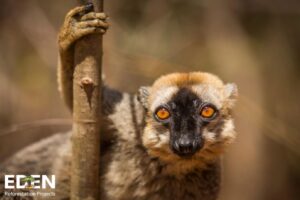 One of the many endangered species of Madagascar

Despite this, over 90% of Madagascar’s original forests have been lost, displacing whole animal populations and robbing Malagasy (natives of Madagascar) of their ability to cultivate and survive on the land.

Mangrove estuaries have vanished entirely, leaving only bare earth to wash out into the sea.

Mangrove forests are important habitats with thick roots that act as an anchor for the soil and coastline, avoiding erosion and acting as a buffer between the rough ocean and shore. 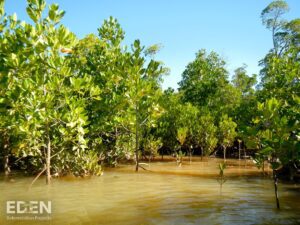 In 2007, the project started with mangrove regeneration and reforestation, but by 2012, it had expanded to include a number of native dry deciduous trees.

Two national park systems are among Eden’s partners, with both the aim of reforesting and restoring natural habitat for endangered and endemic animal species.

In the first month of our soft launch, Play It Green members have contributed to planting a staggering 2748 life-changing trees.

Our three sites in Madagascar are listed below and if you click the link you can even visit them on Google Earth.

For the sake of absolute transparency and for those that wish to see, you can follow the link <here> to view our first purchase receipt for the trees being planted in Madagascar.

All our financial reports, purchase receipts and tree planting reports will be published as they become available.

‘Reforesting the planet is so important not only for the survival of our species, but also to repair the damage we have done to the biodiversity of our planet. I am so proud to be part of this community of change-makers that is Play It Green’ – Richard Dickson Co-Founder of Play It Green.

If you want to offset your footprint through reforestation and take a gentle journey to a more sustainable future, you can join Play It Green by clicking <here>.