Sustainability Tip 65: Get A Sustainable Razor

Humans have been shaving for thousands of years, but as times have changed, our shaving habits have started to have a terrible impact on the environment. Switching to a sustainable razor could make all the difference.

As you might imagine, the biggest problem with razors is the amount of waste they cause.

Disposable razors aren’t classed as “single-use” plastics, but most can only be used for 3 to 10 shaves before it gets blunt, clogged, and sent off to landfills, where billions of them end up every year.

It’s not just disposable razors that are the issue, though. One 2015 report from The Guardian found that the U.K. alone threw away 80 million razor cartridges. While the metal will eventually rust away into nothing, the plastic handle could be around for hundreds of years.

On top of that, because they have to be replaced constantly, it means enormous amounts of waste are also created from often plastic packaging.

So, why aren’t more razors recyclable?

The main reason, as with many non-recyclable products, is that they are made from mixed materials. Their sharpness doesn’t help either, as this means they can damage some recycling machinery.

There have even been several failed attempts to set up recycling programmes for razors, such as with BIC, a mainstream French company, just a few years ago.

In the U.K., Gillette does offer a way to recycle razors and their blades in partnership with TerraCycle. To take part, you request a free shipping envelope with a prepaid shipping label and then pop it off in the post box to be recycled.

Seems simple enough, but households are limited in how many can be sent, and, realistically, it’s too inconvenient for most people to actually do (compared to tossing them in the recycling bin).

Join the movement of people reducing their footprint, repairing the planet, and regiving to a good cause - all for the price of a cup of coffee a week
Sign Up Today

How Else Can My Shave Affect The Planet?

Unfortunately, it’s not just the waste you need to worry about when it comes to shaving.

Manufacturing all the different parts of a razor requires a tremendous amount of energy. For example, to make the blade, the steel needs to be heated to temperatures of between 1,075 – 1,120°C.

There’s also ‘plastic injection moulding’, the process used to produce the various components such as the cartridges, razor handles and carriers for the lubricating strips, which puts a high demand on our planet’s natural resources.

In addition to all that, container-loads of all these different parts are being sailed and flown around the planet constantly, creating even more emissions.

Then you have to consider all the water used at home. According to the USGS Water Science School, shaving your facial hair takes an entire gallon of water. That means if you shaved five times a week, that’s 240 gallons every single year, just from one person.

Of course, you can avoid some of this by switching to an electric razor. These don’t have to be replaced as often, so are better for the environment overall. Though, there is the electricity use to think about. 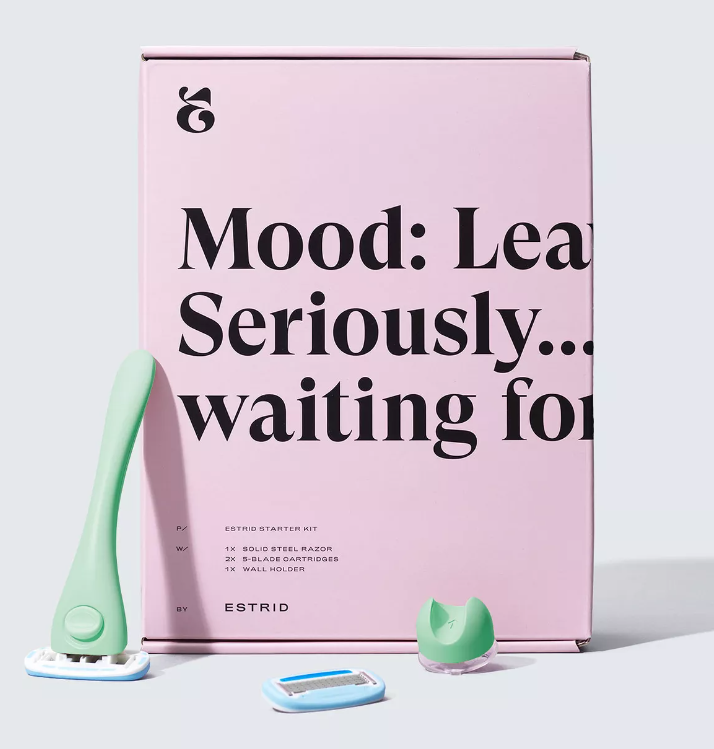 They choose to do things differently, like making sure all of their products are vegan and cruelty-free and designing their stainless steel razor to last you a lifetime.

Estrid works to create a sustainable process for the planet, the wallet, and the body.

Most razor brands use animal by-products in the soothing strips on your razor, but Estrid doesn’t. Instead, they’ve chosen to use natural ingredients like aloe vera, shea butter and cocoa butter.

Their packaging is also 100% recyclable, and every kilo of CO2 emitted via transport to customers is climate-compensated.

A part of Estrid’s mission is to change gender-based pricing, so their razors are made affordable and for everyone.

You can get their starter kit for only £7.95, which includes the razor handle and holder as well as 2 five-blade razor heads for the closest shave possible. Simply choose your colour and let them know how often you shave and they’ll be delivered straight to your door.