Coffee, interestingly, is the second most traded commodity after crude oil.

It has been drunk for thousands of years all around the world, yet the way we consume this beverage has changed a lot.

Coffee pods and the machines that go with them have become commonplace in many households since their introduction only just over a decade ago. Perhaps you even have one at home.

Whether you do or not, it is likely that you’ve heard of their environmental impact.

There are many reasons for this. First off, the materials needed for the pods themselves include aluminium, paper, and plastics, all of which need to be made and shipped to the production site.

Here, the pods are manufactured, before being transported, filled with roasted coffee grounds, and assembled.

They are then put into trays or sleeves, with additional packaging added for retail and for shipping and distribution. Finally, they are transported to warehouses, distribution centres, shops, and, in some cases, directly to customers.

Each step in this process comes with its own footprint and impact on the environment. However, it’s not even the biggest issue.

The vast majority of coffee capsules are not accepted by local recycling collections, leaving them to end up in landfill. To make this worse, aluminium and plastic capsules can take over 500 years to break down.

In a world becoming increasingly focused on sustainability, you may be thinking, why haven’t manufacturers come up with a widespread biodegradable alternative yet?

This is because the nature of the brewing process means that the pods need to be strong enough to withstand immense amounts of heat and pressure. It’s also for this reason that they need to be made of several specialized materials and cannot be easily recycled.

Major companies have tried to take a step forward. In the 2015 Milan Expo, Lavazza unveiled a fully biodegradable coffee capsule made from thistles.

One of the most popular brands, Nespresso coffee pods can be recycled by taking them into one of the 9 Nespresso U.K. boutiques, or by sending them off in the post.

Illy, Dolce Gusto, and Tassimo also have their own recycling schemes, all of which entail sending used capsules off to a specialised recycling plant.

If you were feeling particularly dedicated you may even be able to disassemble the pod, recycle the individual parts, and use the coffee grounds for composting.

All of these options, however, kind of defeat the purpose of having ‘convenient coffee’.

Now that pod sales have reached over 300,000,000 a year in the U.K. alone, eclipsing instant coffee, it is time to do more to deal with this problem.

In Hamburg, Germany, coffee pods have been banned in state-run buildings in a bid to reduce waste.

This may be the right call, as 95% of all coffee capsules used end up in landfill, despite brands attempts at recycling schemes.

There is some controversy surrounding exactly how bad these pods really are for the environment.

One source even claimed that if you put together all the coffee pods produced worldwide by Nespresso between 1986 and 2012, the weight in metric tonnes would be under 1% of the total waste generated in Germany in 2012.

However, since Germany produces 56 billion kilos of waste each year, 1% is still a pretty horrendous amount.

Should we consider banning them here? 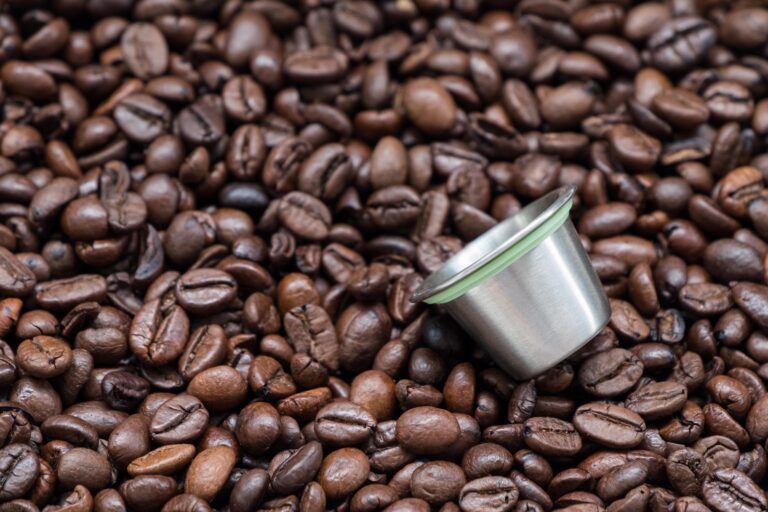 Thankfully, there is a better option. Although they might not be as popular yet, there are some environmentally-friendly alternatives.

This includes biodegradable coffee capsules. Yet, there are still some issues with these as many of them, although marketed in this way, only contain a small percentage of biodegradable materials.

A better choice, which is not only good for the environment but can also help save you time and money, is to opt for reusable coffee pods.

Their coffee capsules are safe to use, corrosion resistance, heat resistant, and extremely durable. They also come in sizes to fit all the major brands, including Nespresso, Tassimo, Dolce Gusto, Vertuo, Lavazza, Illy.

Even better, with their dedication to sustainability, they make sure to plant a tree for every order they get.

Special Offer: To save some money, you can use exclusive discount code ‘PLAYITGREEN’ for 25% off your entire order.