Weekly Tip 42: Snack on Some Insects

By now, most of you likely know about the environmental impact of meat.

Between the incredibly high volume of greenhouse gases released and the huge swathes of land needed, it’s obvious to see why.

This environmental problem is only made worse by the fact that the human population is still growing, expected to reach 9 billion in less than 30 years. If it does, we will need to be producing twice the amount of food we currently do today.

If you factor in the rising demand for meat and protein, as well as a deteriorating climate, it’s abundantly clear that alternatives are needed and fast.

Among many potential options, it’s insects that provide the most promising solution.

Unlike cattle or other animals reared for meat, insects require significantly less food, water, and land. Insects can also feed on ’organic by-products’ such as human and animal waste. This could reduce environmental contamination, a common problem in farming.

To top it all off, the very real risk of zoonotic infections being transmitted to humans is significantly lower from insects than cattle, pigs, or poultry.

The benefits, however, go way beyond just how sustainable they are.

The majority of insects have a much higher percentage of protein than soy, meat, and fish and, not only that but are nutritionally rich in other ways too.

This includes vitamin B12 which, for people eating an omnivorous diet, is mainly obtained through meat products, as well as iron, calcium, magnesium, and important omega 3 fatty acids. 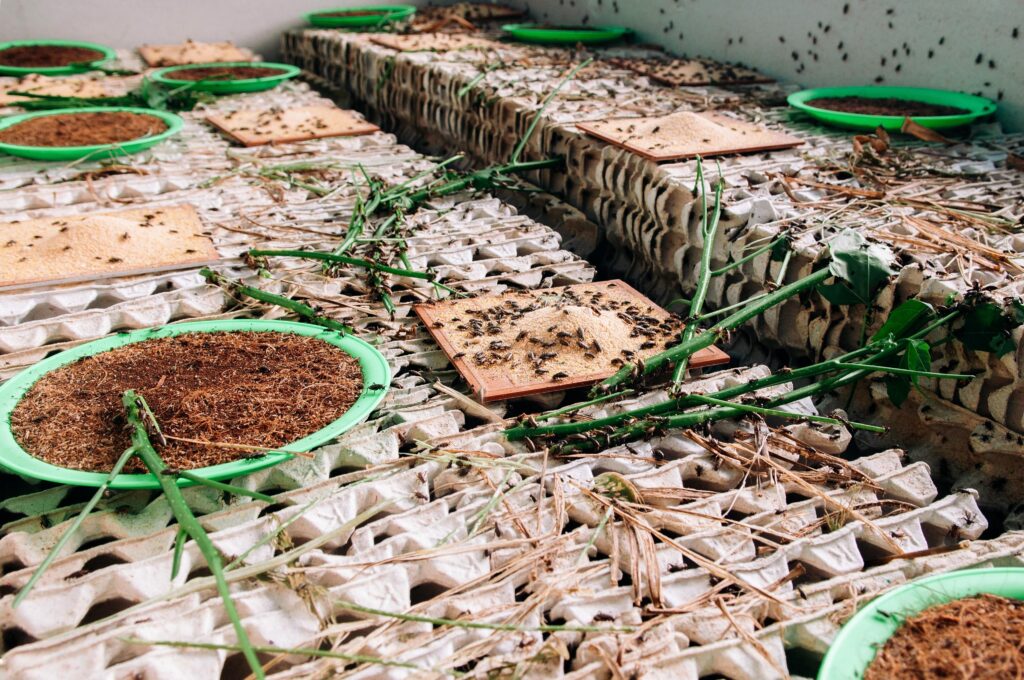 While you may be put off at the thought of eating bugs, more than 2 billion people in the world (that’s 1 in 4!) already do.

In the Democratic Republic of the Congo, for example, caterpillars are eaten all year round as part of a normal diet.

In Kinshasa, the Congolese capital, a single household eats an average of 300g of caterpillars a week. This equates to an astonishing 96 tonnes being consumed in the city annually.

Insects are also popular in Southeast Asia and are increasingly being marketed towards tourists there. Here, a huge variety of insects are prepared and concocted in different ways to make them as tasty as possible.

But what do insects actually taste like? Of course, this depends on how they are cooked! Crickets, for example, also drastically change flavour depending on what they have been fed (mint-fed crickets tasty minty!).

Most insects will have a strong umami taste, with scorpions being described like ‘beef jerky’ and large crickets having a ‘nutty’ taste.

If you’re still not convinced, the consumption of insects can bring along direct and almost immediate societal benefits, too. Unlike farming for meat, the rearing and processing of insects can be performed without any sophisticated machinery.

This means that the poorest members of society can be encouraged to participate, providing them with employment, income, and potentially lifting them out of poverty.

If you’re looking to try some of these tasty, sustainable, and socially good treats for yourself, Play it Green recommends Small Giants.

Small Giants cracker snacks have no visible insects (so none of that gross factor). They are made with 15% cricket flour and 100% natural ingredients such as wheat flour and extra virgin olive oil.

Using the combination, they get protein, B12, and umami taste from the insects, as well as fibre, texture, and crunchiness from the cereals. Moreover, every single one of their treats is oven-baked to perfection.

Small Giants are doing their best to have an environmental impact in other ways too. While plastic is unavoidable in their packaging, they are a ‘plastic neutral’ company.

This means that they donate a percentage of every product purchase to fund the collection of 200lbs of low-value plastic waste from oceans and landfills every year.

They also promote the informal recovery and recycling of single-use plastic containers in Nairobi, Kenya. This employs and empowers waste pickers to tackle plastic waste.

By doing this, not only are they helping promote a more sustainable way of eating in the West, but are actively removing waste from the environment and helping avoid 200lbs of carbon emissions every year.

If you’re tempted to give their snacks a try (and why wouldn’t you be), you can get 15% off your order by using the discount code GREEN15. Happy snacking!

Join Play it Green to REPAIR the planet through reforestation, REDUCE your footprint with weekly tips and discounts on sustainable products, and REGIVE 10% to a good cause of your choice.
Start Your Journey
Back to articles