It’s officially summertime, so it’s time to get out your swimsuit. But first, maybe take a moment to consider the impact it’s having on the environment.

Modern-day swimwear faces the same challenges as most fashion nowadays: it’s not built to last. ‘Fast fashion’ is a serious issue, using up energy and resources and causing vast amounts of waste. The main problem with swimwear, however, is that it’s usually made of plastic.

Synthetic fabrics like nylon, polyester, and spandex are perfect for wearing in the water because they wick moisture and stretch across the body. They’re versatile and, most importantly, inexpensive, making them the preferred choice in the fashion industry not just for swimsuits but active- and outerwear too.

Because of this, an estimated 65 million tonnes of these plastic-based materials are generated every year. Plastic isn’t biodegradable, so it sits around in landfills or oceans forever, adding to the estimated 8 billion tonnes of plastic that already exist on the planet. Some countries have even resorted to burning it, which creates enormous amounts of carbon since plastic is made from fossil fuels.

It’s not just the waste that is harmful, though. When we wash synthetic materials, it can release microplastic into the water. These eventually find their way into the ocean, into sea life, and eventually into our own bodies. While the exact effects of these microplastics are still being researched, it’s likely putting stress on our livers and kidneys.

So, what’s the alternative?

The planet needs your help. Join the movement of people making an impact by reducing your footprint, planting trees, and giving back to the cause that means most to you.
Click Here

There isn’t currently a biodegradable material with all the performance qualities necessary for a swimsuit. Yet, that hasn’t stopped some pioneering brands from finding new and innovative ways to create swimsuits that are kinder to the environment, from repurposed old fishing nets or even ocean waste.

If you’re on the lookout for some new swimwear, here are some things you can look out for to make sure you’re buying sustainably.

Considering how much plastic already exists, avoiding swimwear made from virgin (new) nylon and polyester is best. An increasing number of brands are adopting recycled alternatives such as Econyl, regenerated nylon that’s collected from landfill and our oceans instead.

As recycled nylon still releases microplastics when washed, some brands have also started using natural textiles. This can be hemp or Yulex, for example, a natural rubber alternative to petroleum-based neoprene.

Buying swimwear that will last, rather than something you’ll wear for one summer and then throw away, is vital to reducing your environmental footprint. That means looking for durable pieces that will stand the test of time and avoiding flimsy fabrics that quickly lose their shape.

When your swimwear does eventually reach the end of its life, there is a way you can make sure it doesn’t end up in a landfill. Check whether the brand you’re buying from has a recycling scheme and give a new purpose to your swimsuit.

Hand-washing, while only relevant after you’ve bought your swimwear, can still significantly reduce the product’s environmental impact. This stops microplastics from entering waterways and the ocean. It’s also recommended to avoid direct sunlight when hanging them up to dry, which causes the material to thin and the colour to fade. 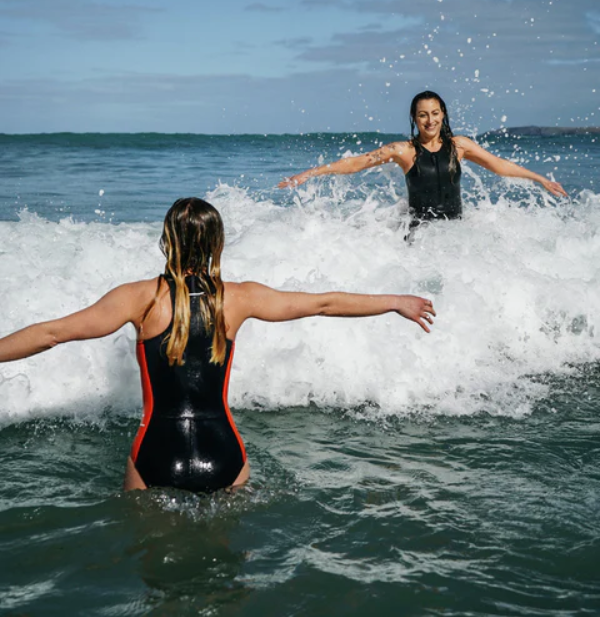 One fantastic sustainable swimwear brand is Finisterre. Born over a decade ago from the needs of hardy British surfers, Finisterre designs functional and sustainable products for those that share a love of the sea in a more responsible and transparent way.

Since their founding, Finisterre has taken a pioneering approach to making better and more sustainable products, challenging and innovating, seeking alternatives to what has gone before. They are committed to making informed decisions about our impact on the environment and are constantly trying to push boundaries to make the best product we can. Their swimwear will be with you the longest; and the longer you have it, the more attached to it you become.

Finisterre is also certified as a B Corp and never use single-use non-degradable plastic. On top of that, they started ‘Lived & Loved’ repairs over a decade ago to reduce waste and extend the useful life of their products.

Currently, they have a sale for up to 50% off, and you can sign up for their newsletter to get 10% off your first order. Click here to shop Finisterre.